Since 2002 the International Institute for Strategic Studies (IISS) Shangri-La Dialogue has been a platform for ministers to have bilateral discussions to determine solutions to security challenges in the Indo-Pacific Region. The 18th Asia Security Summit was held in Singapore from May 31st to June 2nd. Influential leaders from around the world came together to address both the current state of the Indo-Pacific region and issues the region faces. Among the speakers were Patrick M. Shanahan, Acting Secretary of Defense of the United States; and General Wei Fenghe, state Councilor and Minister of National Defense, China.

Much like Secretary Mattis’ address last year, Acting Secretary of Defense, Patrick M. Shanahan shared the United States vision of a free and open Indo-Pacific region and the necessity for open communication, trust and a commitment to common values. Acting Secretary Shanahan described “the very real progress the Department of Defense is making to usher in a new age of technology, partnerships and posture that presents an unprecedented opportunity for our Indo-Pacific network of allies and partners.” Shanahan went on to state that the United States is three years into this undertaking and that Congress has recently removed budget caps and fully funded the defense strategy. This funding will allow for new and experimental technology that is innovative and more modernized than what is currently in place. The priority of the United States defense strategy is the Indo-Pacific region, which means much of the budget will be spent on this mission.

The goal moving forward should be to build a security network that is based heavily on trust and is both resilient and inclusive, this will support the shared vision of keeping the Indo-Pacific region free and open. In the next five years, the United States has plans to invest a significant amount of resources into programs that are critical to supporting this vision. These programs include areas such as: undersea warfare, C4ISR (command, control, communications, computers, intelligence, surveillance and reconnaissance), missile defense, tactical aircraft, and the domains of cyber and space. Acting Secretary Shanahan went on the discuss the enormous amount of money that has been requested for the fiscal year to conduct research and development of emerging technologies ($104 billion) and operational readiness ($125 billion). This funding allows for the purchasing of 2,000 aircraft, 200 ships and submarines, missile defense systems and the placement of over 370,000 American soldiers in the region.

Yet another similarity to lasts year’s address given by Secretary Mattis was the discussion of China’s movements in the region. Acting Secretary Shanahan spoke very firmly about China’s recent actions and how they seek to undermine the international order and threaten the openness of the region. These behaviors include: 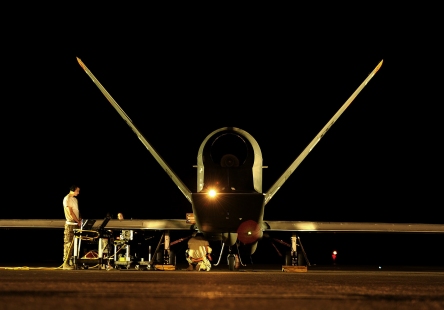 A Push Towards Less Expensive Drones in the U.S. Military

You can find out more about which cookies we are using or switch them off in settings.

This website uses cookies so that we can provide you with the best user experience possible. Cookie information is stored in your browser and performs functions such as recognising you when you return to our website and helping our team to understand which sections of the website you find most interesting and useful.

Strictly Necessary Cookie should be enabled at all times so that we can save your preferences for cookie settings.

If you disable this cookie, we will not be able to save your preferences. This means that every time you visit this website you will need to enable or disable cookies again.